We arrived in Arequipa early in the morning after a long overnight bus from Huacachina. Most of the bus got dropped off at the Flying Dog hostel, which thankfully allowed us to use their lobby area to rest and charge our phones and cameras. Since many of us were booked there for the following day, we were able to have our backpacks stored before our two day one night tour of Colca Canyon. We left for Colca Canyon a little after 9 AM with a number of our friends from the bus and made our way toward Chivay.
We made a couple of stops along the way, first at Salinas National Park, which was home to herds of vicuña (llama relatives) and stunning mountain landscapes. We made a few stops in the park, one of which was a for a herd of llamas grazing along the road. The landscapes in this area were absolutely amazing, especially for fans of the barren and desolate. The bus continued higher and higher in altitude before our next stop, Mirador de Los Andes, a viewpoint located at 4,910 meters (16,017 ft) above sea level. Since this was our first day at high altitude, a few of our friends had some difficulty with the low oxygen content, though Kirsten and I had no troubles. After taking a few pictures of the surrounding volcanoes and mountains, the tour descended into Chivay, the base town for Colca Canyon treks and tours. There was one last overlook where we took a number of pictures of the town and were able to pet and take photos with a baby alpaca (who later tried to push a small boy off a cliff).

We finally arrived in Chivay around 2:30 PM, when we went to a tourist restaurant with an all-you-can-eat buffet of Peruvian food, which was actually pretty decent. After lunch our guide drove us to the beginning of the canyon where we took a short hike through into the canyon with absolutely stunning views of the valleys and snow capped mountains. The hike probably lasted for an hour or so, after which we headed to the volcanic hot springs located outside of the town. A friend and I managed to get separated from the group and ended up in a thermal pool by ourselves, which was really relaxing. The waters were filtered to get rid of the sulfuric smell but retain the minerals and heat, which felt wonderful after long bus rides and the earlier hike. We had dinner at a crappy tourist place that had terribly slow service and filled with smoke from the pizza oven inside, which made it really hard to breathe. Once that ordeal was finished, we checked into our hotel and went to bed early for our early morning trip into Colca Canyon.

We began the trip into Colca around 7 AM, which felt way too early but the morning light made the landscape brilliantly colored. We stopped in a small village with a church about an hour later to use the bathrooms and buy snacks and souvenirs. At one point a friend of ours had a large bird perch on her head for photos, which was hilarious. The stop was fairly brief, and afterward we continued on into the canyon.

We arrived at the condor viewpoint around 9:15 AM, which at first was pretty but underwhelming, especially since we had a couple hours to kill there. At first there were only a few condors flying around, but after about 30 minutes at least a dozen began flying around the canyon near where we were standing. There were a couple of viewing platforms available to watch from, so we hiked all over them to see the birds from all the different angles. After about an hour and a half our guide gathered the group up and we took a moderate hike along the valley to see the landscapes and various local plants that grew in the area. We finished the hike around noon and continued toward another viewpoint before heading back to Chivay for lunch and then onward to Arequipa before nightfall. Bonus: at the last stop we got to eat cactus ice cream, which was amazing.

We got back to Arequipa around 6 PM and checked into our hostel, and then visited the Santa Catalina Monastery with a group of friends from the bus. On certain nights of the week the monastery is open at night, and that night happened to be one of them, which was convenient as most of our friends were leaving for Cuzco in the early morning. We all toured the various streets and buildings of the monastery — which is essentially a walled off town within the center of Arequipa — for an hour or so before heading to the main plaza to see the cathedral and other colonial architecture.

After wandering through town for a bit, we went out in search of a restaurant that served cuy, otherwise known as guinea pig. We got a great recommendation from the hostel for a good local place that served it and all but two of us ordered it for dinner (the other two were mortified at the thought and could barely watch – though one did manage to try a bite). Everyone seemed to enjoy the meal, and the owner of the restaurant even made an earring for one of our friends out of the tooth of the guinea pig she ate. Unfortunately we had to say goodbye to many of them in Arequipa as we were staying an extra day to see the city.

The next day we spent wandering the old city of Arequipa. First we visited the Jesuit church, which had stunning architecture and intricate murals on the domed ceiling in one of the side rooms. After the church we visited the Museo Santuario Andino, which houses the Juanita mummy, and perfectly preserved mummy of a child sacrifice which was found frozen on top of a local mountain. The features of the body are incredibly preserved and the associated artifacts were explained well by our guide, who was an archaeology student at the university which runs the museum. Unfortunately you aren’t allowed to take photos, and cameras must be checked at the entrance to make sure the rule is followed.

We left the museum and grabbed lunch before heading to the Basilica of Arequipa, which also required a tour guide. Thankfully the service was included in the ticket price and the two of us were the only ones on the tour. The guide was knowledgeable about the history of the church and the former priests, and I ended up being glad we had to hire her for a tour. There were a number of rooms available to tour which held various relics from the church’s history. Toward the end of the tour the guide took us on the roof of the church to show us the bells and the view of the main plaza, the monastery, and the volcanoes in the distance. The views from the top were great and the tour was absolutely worth taking.

Once we finished at the church we returned to the Santa Catalina Monastery to take more pictures during the day, since it was so impressive during the night prior. The difference between night and day is striking, as the colors were much more vibrant than I had expected after seeing them the day before. We stayed much longer on the second visit in order to see everything we missed the night before. I would recommend visiting during the day and the night if possible, as both experiences are fascinating and worth the price. Once we finished in the monastery, we wandered through the town centre again before grabbing dinner and going to bed before our early morning bus to Cuzco. 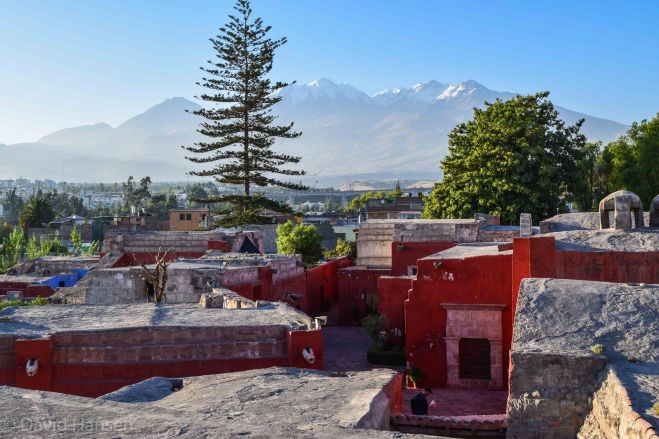 Bioarchaeologist in training with an incurable travel bug. I write about my travel experiences and archaeological sites/research from around the globe. View all posts by David Hansen